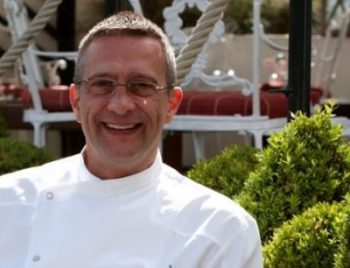 Alain Roux was born into a family of chefs and is now an incredibly successful and honoured leading light in the culinary world.

In his early years after his initial apprenticeship in pastry, he spent several years touring some of France’s most notable kitchens, including La Cote Saint-Jacques in Joigny and Restaurant Pic in Valence. He walked into The Waterside Inn professionally for the first time in 1992 and has spent years working through the ranks to where he is today. At the turn of the millennium, he was joint Chef Patron with his father, later to take over in his own right a couple of years later.

In 2000 he was invited to become a Master Pâtissier in the International Association Relais Desserts putting him in company with the best pastry chefs in the world. 2003 saw Alain become a member of the Royal Academy of Culinary Arts, the leading professional association in the UK. Just a few short years later, in 2008, Alain received an Honorary Fellowship of the Faculty of Professional Studies by Thames Valley University.

Alain may prefer to keep away from the bright lights of publicity, but he participates in the “Adopt a School” scheme, supported by the Royal Academy of Culinary Arts. Also since November 2015 he has been joint Chairman, along with Michel Roux Jr, his cousin, of the Roux Scholarship. Both these commitments demonstrate Alain’s inherent desire to foster the next generation of Chefs.

I am so honoured to have Mr Alain Roux passionately endorsing and serving Mossy’s. Here are some of his own words about Mossy’s Original;

“For me, Mossy’s Original Yoghurt is an easy choice. Its superior flavour, the perfect balance of mellow sweetness and mild acidity, coupled with its velvety texture, makes it a versatile base for various dishes.

In particular, I use Mossy’s to make classic desserts such as milky mousses and pannacotta. Our guests also enjoy it served plain and natural or blended with fresh fruits, a refreshing, simple pleasure”.